Irish beer is dominated by Stout.

Irish beer has a long history, as well as Irish beer brewing. In the beginning of the nineteenth century there were in total more than 200 breweries in Ireland, this fell during the nineteenth century to about fifty, and now today there are only about 12 left.  Ireland produced historically Irish beer called ale, made without hops because these were not native to the Irish country. But Ireland did not use them all through the 18th century, almost all other countries did use hobs as an ingredient because of the flavor it gave their beers.

“Most beer was imported from England and Scotland in the eighteenth century. However in 1756 Arthur Guinness set up a small brewery, moving to Dublin in 1759. Having initially brewed bitter, he switched to producing porter, which was a style from London. Unlike the London beers he used some unmalted roasted barley for his Irish beer, as this avoided tax (which was on malted barley only), making it more bitter and dry. In the early twentieth century the Irish beer brewer Guinness became the largest brewer in the world, exporting the Irish style to many countries.” quote from Wikipedia
There are a number of different types of stout:

Roasted Barley is the key ingredient in Irish beer like the classic Irish Stout, it gives the beer a dry coffee like taste, a very dark color but still a white foam. This key ingredient is in fact at an high temperature roasted unmalted barley grain, to prevent it from burning the grain is lightly sprayed with water. 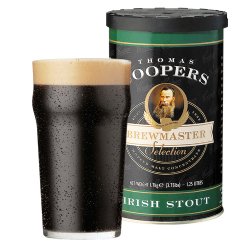 At Coopers they have an excellent Irish Stout Package this has all the ingredients you need to make a beer that has an impressive richness of chocolate malts and roasted barley. A wonderful Irish beer you should really try brewing.