If you’re like many beer enthusiasts, then the chances are excellent that you’ve at least considered crafting your own brews at home. However, at first glance, the fine art of creating perfectly brewed beers yourself can seem daunting and intimidating, causing many beginning brewers to abandon the idea before they even find out what it’s all about. The truth is home brew ale kits such as the world-famous Coopers Real Ale kit have revolutionized home brewing, turning it into a simple, foolproof process that can be mastered by just about anyone. 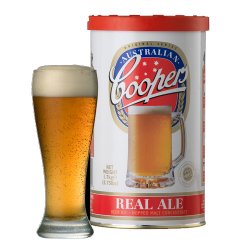 Coopers Real Ale is a complete, all-in-one brewing kit that simplifies the brewing process into its most basic form, making it the perfect way for a beginning home brewer to get started and produce his first batches of homemade beer with a minimum of fuss. It’s literally as simple as mixing the ingredients included in the kit, allowing the mixture to brew, bottling the product, and enjoying your fresh, homemade beer with your friends and family. The entire process takes a mere three weeks to complete and results in a premium-grade product that could only have been created by the famed Coopers Brewery of Australia, making it one of the top choices in brewing kits among home brewers everywhere.

When it comes to taste, Coopers Real Ale produces a remarkably smooth beer that boasts a rich malt flavor accented by just the right hint of fruitiness. Finished batches will be a deep, inviting golden color and feature a creamy head and ever so slightly bitter finish. Not only will your homemade Coopers Real Ale be something you’re proud to serve your friends and family, but it will be something you’ll be equally proud to tell them you made yourself.

What People Are Saying About Coopers Real Ale

“As a seasoned beer lover and a fan of the Coopers brand name, I have to admit I was a bit skeptical of a product that claimed to be able to duplicate such a famous product through the use of a Coopers Real Ale kit. My curiosity eventually got the better of me though and I’m now a total convert. The beer I made using this kit was smooth, delicious, and incredibly clear. I still am not sure how Coopers pulled this one off.”

“I’ve tried a number of home brew ale kits in the past, but I honestly wasn’t impressed with any of the results. However, a buddy of mine gave me some Coopers Real Ale for Christmas, so I decided I might as well give it a try. I’ve never tasted anything quite like this particular beer and I really can’t believe I made it with a kit. I even served some to my brother, who is a lifelong beer connoisseur and he thought it was amazing.”

“Coopers Real Ale has really spoiled me for other home beer making kits, I can tell you that much. Not only does the beer it produces taste great, but it’s good enough that I feel totally comfortable serving it to guests and friends. In fact, it’s one of my favorite game time beers! You really can’t beat the price either.”